Our blog. Our voice.

An Encouraging Look at the Indianapolis Real Estate Market

In February, Cushman & Wakefield — a leading commercial real estate services firm in Indianapolis and around the world — held its 2017 State of Real Estate event, providing property owners, occupiers, and investors a look back at the previous year and a glance into the future.

My colleague, Leah Stanton, and I attended with hopes of hearing some positive signs within the Indianapolis real estate market. And we found just that!

Below are my somewhat abbreviated thoughts from this year’s event.

The State of Indiana’s Economy

He hopes to continue leveraging Indiana’s crossroads of America location, further establishing a long-term infrastructure system that makes Indiana unique within the U.S. He also sees Indiana as a leader in the tech sector, specifically pointing to Salesforce’s occupation of Chase Tower as a “lighthouse” within the innovation economy.

“It’s not just a beacon of hope, it’s a beacon of opportunity. And success breeds success. And so, what we need to continue to do is go out and hunt for those jobs,” said Holcomb. “The workforce that is available coming out of Notre Dame or I.U. or Purdue or Rose-Hulman — just think about that network of colleges or universities that we have here — we’ve got the ingredients for successful business.”

And where should Indiana businesses lean in the coming decades? For Governor Holcomb the answer is obvious.

“If you’re a company today, you have to be Ag plus Tech. You have to be Logistics plus Tech,” Holcomb forecasted. “You don’t need a crystal ball to look into to see what your fate will be if you’re not leaning into the technology front.”

Watch the full dialogue between Governor Holcomb and Gerry Dick below.

A Look at the Macroeconomic Environment

Next up, Kevin Thorpe, chief economist and global head of research at Cushman & Wakefield, offered his look at the macroeconomic environment before diving into the Indianapolis marketplace.

And in spite of Thorpe’s acknowledgement that his “economic forecast in 2014 was the least wrong of them all,” I still discovered the following intriguing notes from his presentation: 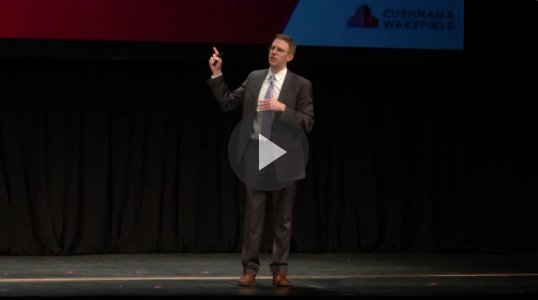 Several Cushman & Wakefield staff members then took to the stage, exploring the Industrial, Office and Retail Leasing sectors within Indianapolis. Following are the most intriguing findings from these markets, with links to the full presentations included: 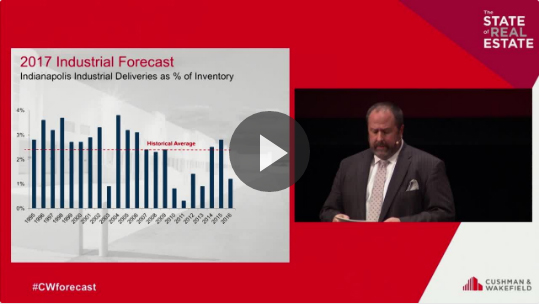 Check out all presentations from the 2017 State of Real Estate, as well as photos from the event.